Skip to content
HomeA Galaxy to Conquer is NOW available on Amazon! 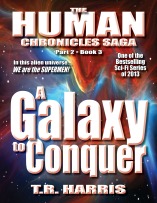 Click here to be taken to A Galaxy to Conquer on Amazon.

In this book, all the great forces in the galaxy clash for one final, epic battle to determine who will come out on top. And racing the clock is Adam Cain and his team of aliens and SEALs out to rescue Riyad Tarazi from a Kracori prison ahead of the approaching conflagration. The Kracori homeworld of Elision is about to be destroyed, and if Adam and his team can’t get Riyad out in time all will be lost.

For this one final mission, Adam has recruited many of his old friends from past adventures, including the aliens Kaylor and Jym, along with his old SEAL Team Six teammates Master Chief Geoffrey Rutledge, Petty Officer First Class John Tindal and Admiral Andy Tobias. And of course, the feisty and always interesting Sherri Valentine is along as well, bringing with her a unique down-home Kentucky brashness that readers in the past have found ‘humanizing’ to the Saga.

Within the pages of A Galaxy to Conquer you will learn the fate of all these characters and more, plus a resolution to the geopolitical struggles plaguing the galaxy. You will also learn what becomes of Adam Cain. (Let’s just say this old soldier doesn’t just fade away. Instead he heads out for new adventures in a  galaxy far, far away.)

Don’t miss this exciting, final volume of The Human Chronicles Saga — one of the bestselling sci-fi series on Amazon for the past two years. Once again, the hard-headed aliens of the galaxy have to be taught a lesson, one they repeatedly seem to forget: Don’t Mess With The Humans!

One thought on “A Galaxy to Conquer is NOW available on Amazon!”

RECENT POSTS (See below for posts by category)

My Books (on Amazon.com)